Join us for an intimate in store show on Friday 1st October at 1pm (lunch time set). One purchase of any format per person for entry. This will include a signing session and a tribute pie chosen by the band! Details coming very soon… 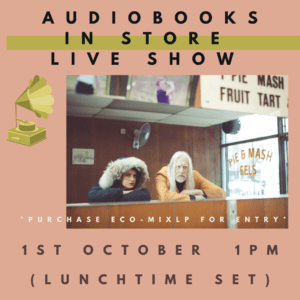 Audiobooks threw absolutely everything at their 2018 debut album, Now! (in a minute), a hectic, head-spinning blast of freewheeling freak-pop genius. On its follow-up, Astro Tough, via Heavenly Recordings, they’ve somehow found a way to ramp things up even further, concentrating their chaotic energy and inherent weirdness into a record that’s bigger, deeper and more powerful than even its predecessor.

“The first album was a photograph of the beginnings of the project, recorded without any overall plan,” Wrench explains. “Astro Tough is more scripted, but a script that still allowed for lots of improvised scenes. There was more intention behind the songs, and a lot more refining. We weren’t precious about everything being spontaneous and a first take, like on the first record, even though some of it ended up being that. We made a lot more material for this record but chose the tracks that best worked together as an album.”

Multi-instrumentalist and super-producer/mixer Wrench, known for his work with Frank Ocean, the xx, Caribou, David Byrne, Manic Street Preachers, and Goldfrapp, is as comfortable unleashing monolithic psychedelic wig-outs and heavy dub-driven monsters as he is crafting irresistible synth-pop bangers. Writer, vocalist and visual artist Ling is as chameleonic as she is charismatic, able to jump from detachment to rawness to aggression to tenderness to hilarity to toe-curling awkwardness, sometimes within the same song.

Above all else Astro Tough is a record that brims with energy. With their roles diverging more clearly than on their debut – Wrench handles almost all the music, Ling the lyrics and vocals – both dig deeper into the enormous emotional potential of each. “I definitely go to town with my feelings,” says Ling. “If I find I’m in a certain mindset, I’ll go as extreme as I can with it in my lyrics. I know I’m being over-dramatic.” Take the babbling hedonism of ‘Lalala It’s The Good Life’ for example, or ‘Blue Tits’ – a song so toe-curlingly seedy that it’s sometimes too much even for the singer herself.

Though the record is a product of increased refinement, the pair were physically together only in bursts, cramming sessions around their respectively hectic calendars. “We had much less time together than on the first record, but every time I did see David that thirst and the ability to come up with something was there. I think this record is better than the first record, and I think we’re dying to make more. We’re going to try and better it again,” Ling says.